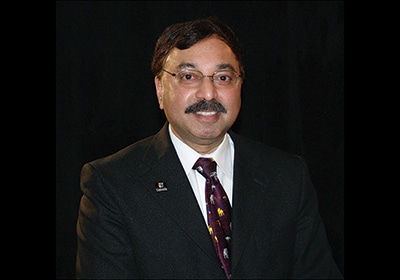 Dr. Bruce Corrie refers to it simply as “the idea.” As chair of the Governor’s Working Group on Minority Business Development, Corrie first presented it in a report in 2000, and it has served as the polestar of his professional life ever since.

“What if the mainstream perception of minorities and immigrants shifted from the deficit mode to the asset mode?” asks Corrie, who immigrated to the United States from India in 1982 to pursue a doctorate in economics at Notre Dame. “That change of perception would change everything.”

After 25 years on Concordia University’s faculty, the last 12 as dean of the school’s College of Business and Organizational Leadership, Corrie was appointed associate vice president for university relations and international programs in 2013. His current role allows him to focus on researching and championing the contributions of the ALANA (African, Latino, Asian, native American) communities locally and nationally. Corrie is the cofounder of OneMN.org, a multiethnic, nonpartisan coalition that advocates for issues on behalf of ALANA communities and individuals in Minnesota.

Corrie was nominated by Hyon Kim, owner of MN Best Enterprises Inc., a Minneapolis-based technical consulting firm. “Dr. Corrie is an exemplary candidate for this award, an immigrant who has not only found personal success, but has worked ceaselessly to advocate for the success of all immigrant and ethnic communities,” Kim says.
Corrie is determined to reframe the immigration debate by urging legislators, policy makers and ordinary citizens to look beyond the fiscal costs typically associated with immigrants and minorities.

“To people who say that immigrants are taking people’s jobs and costing the state for services, I say, ‘Fine, let’s say your numbers are valid, but have you documented the benefits in other areas to determine the net cost and the net benefits?’” he says. “If we keep a balanced, open-minded approach, the state as a whole can come out ahead with the right policies and programs.”

Corrie’s concept of “ethnic capital” (ethniccapital.com) presents a new paradigm for viewing ALANA communities in a comprehensive, holistic way. The first of three pillars supporting Corrie’s framework of viewing immigrants and minorities as assets instead of problems is the role of cultural capital. “Members of these communities add to the culture of the state by enriching the lives of Minnesotans through art, food, music and ambience,” he explains, adding with a smile, “Maybe the new hot dish of Minnesota could be chicken curry and rice.”

“Corrie and his colleagues are championing a ‘blue ocean strategy’ around ethnic cultural heritage as a destination point. ”

The second pillar is global trade networks; the third pillar is civil and political engagement. Corrie suggests that the turnout of ethnic groups in certain precincts may have tipped the 2010 gubernatorial election in favor of Mark Dayton, who won by less than 9,000 votes. Corrie points to the political activism in Somali, Hmong and Latino communities.

Corrie and his colleagues are championing a “blue ocean strategy” around ethnic cultural heritage as a destination point. In St. Paul, this strategy has found expression in the World Cultural Heritage District along University Avenue’s light-rail Central Corridor. “This will offer visitors a rich cultural experience and build up the economic base of the ethnic communities,” Corrie says.

While Corrie’s data are well known in ALANA communities and in the media, he acknowledges the challenges in communicating “the idea” and achieving lasting cultural change.

“I think of this award as celebrating the message of possibilities that immigrants and minorities bring to Minnesota,” says Corrie, who has developed an app for Google Play and iTunes that presents an interactive map of every state with data on immigrant capital.

“That concept has still not permeated the mainstream consciousness and policy infrastructure of the state. We need that to happen, and then you’ll see possibilities opening up.”