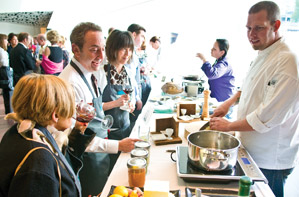 A Walker Art Center fundraiser last June let art fans and foodies hob nob with their favorite local chefs and Wolfgang Puck, the famous chef behind the Walker’s restaurant and catering operations. Cuisine Art was a food-driven event with ’80s-inspired dÃ©cor. Guests arrived and donned black aprons emblazoned with canary yellow, magenta, and teal color splatters—the event’s logo—preparing them for an evening of hands-on food fun. This logo echoed the design of the invitation, which was printed on translucent acetate.

At the chef challenge in the Cargill Lounge, 10 local chefs competed to create the best small plate. “It was based on this palette to palate concept, where [the chefs] could go to the Walker [prior to the event] and choose any art piece in the building and use it as their inspiration for their dish,” says Todd Pinzuti, owner of Bungalow 6 Design, an event design company based in Minneapolis. Each chef station had a photograph of the art piece they chose and an explanation of why. Brenda Langton from CafÃ© Brenda, Scott Pampuch of Corner Table, Asher Miller from 20.21 Restaurant and Bar, and Sameh Wadi from Saffron Restaurant and Lounge, were among the chefs participating.

Guests mingled and sampled hors d’oeuvres and drinks. With their aprons on, they could participate in the chef’s challenge, if they chose. During the reception, they could also check out all the galleries at the museum. Guests were also asked to cast their votes for the best of the chefs’ small plates. Puck cast his vote, too, along with Andrew Zimmern, a local food critic and host of the Travel Channel’s Bizarre Foods program.

Next, guests took off their aprons and were ushered into the Skyline Room, where Wolfgang Puck treated them to a special dinner. The three-course meal consisted of an heirloom tomato salad with Maine lobster and white soy vinaigrette, roasted halibut with sweet shrimp ragout, watercress and pineapple sambal, and Szechuan-style Kobe beef strip-loin with stir-fried vegetables and armagnac sauce. Pinzuti says appropriate wines were paired with each course.

The pop colors carried over into the dining room. where three long baron’s tables, each seating 50 guests, were arranged. Each table was set with linens and chargers in one of the logo colors, and Lucite chairs added to the pop look. Clear plastic “linen” overlays printed with the logo paint splatters were manufactured by Velon Designs, a graphics company in California. Pictura Graphics in Golden Valley made oversized window graphics of the paint splatter motif. Napkins, candelabras, and silk, paper, and fresh roses, peonies, and dahlias were dyed to match the table cloth. Pinzuti chose the long tables over standard 10-person round tables because it allowed for more interaction among a larger group of people while eating.

The event concluded with dessert in the Hennepin General Mills Lobby. Wolfgang Puck mingled with guests who ate dessert and drank coffee, liqueurs, and cognac. Contemporary white lounge furniture was accented with teal pillows and teal LED up-lighting and made for a relaxed end to the evening. As they left, guests got a couple goodies: their apron signed by Puck, and a swag bag from sponsor Target, which contained a bottle of Wolfgang Puck wine, a wine bottle opener, and a donation to a local food shelf in every guest’s name. The Walker gift shop provided the tote bags.

Pinzuti says one major challenge was to take the mostly white museum space and transform it into an inviting and exciting environment. He accomplished this with the bright color palette, and by using LED up-lighting around the perimeter walls to bathe the space in color.

The event, in its fourth year, went smoothly, in part due to keeping communication channels open between all stakeholders, including the gala committee, the sponsor’s community relations office, facilities management, and the museum development office.