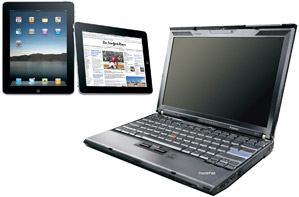 One of the themes at last winter’s Consumer Electronics Show in Las Vegas was the convergence among portable computer categories. Size and performance once set laptops apart from netbooks, and tablets apart from smart phones. Those lines are blurring as manufacturers create new ways to pack more power into smaller packages. Lenovo’s new line of portable computers typifies the trend. The ThinkPad X201’s 12-inch screen makes it one of the smallest laptops on the market. It’s a little bulkier than a netbook, but that extra weight gets you a battery that lasts up to 11 hours and a powerful processor that’s usually only available in larger computers. PC Mag calls it the best typing experience of any ultraportable. Lenovo’s machines are also known for their ruggedness. A tablet version further blurs the lines, allowing the screen to be swiveled and locked flat against the base. And the company is preparing to release the U1 Hybrid, a notebook computer with a detachable screen that becomes a multi-touch slate tablet.

Apple’s much-hyped tablet device won’t replace the laptop, but it just might replace the clipboard. The iPad’s big business potential may be in putting real-time information in the hands of people who don’t spend much time at a desk, from busy salespeople to retail and warehouse managers. Apple’s App Store boasts a growing number of business-oriented applications. There’s an app for creating database forms. There are apps for following financial news. There are apps for keeping track of to-do lists. Did we mention it’s also an e-reader and a video-game console? The iPad has its drawbacks, and lots of competition is on the horizon. Users can only install Apple-approved software, and once installed they can only run one program at a time. Still, its simplicity, quick responsiveness, and relatively low price (starting at $499 for a wi-fi–only model) make it a tool/toy worth trying out.