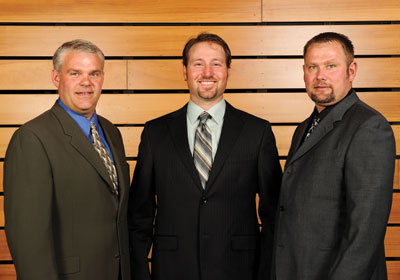 The way builders construct homes hasn’t changed radically in decades. But if Tadd Johnson and Adam Hegland have their way, the construction industry is in for a big shift. Long-time residential builders and remodelers, the partners developed a radically new way to make homes and commercial buildings more energy efficient.

They spent more than two years fine-tuning their home-insulating Energy Max Panels, comprised of a higher-denisity version of the material used to make coolers. What’s interesting is where the panels are installed—on the outside of the stud walls instead of the inside. Builders install the panels on floors, walls, and ceilings and then seal the seams with foam, slashing energy costs 50 percent to 70 percent, Johnson says.

The traditional way to build involves framing a house and its interior walls; covering the stud walls with plastic sheeting, which acts as a vapor barrier; and filling a six-inch cavity with fiberglass insulation. It all gets covered with house wrap and dry wall. Problem is, the cavity traps moisture that can spawn mold, especially because houses are being built “tighter” in pursuit of energy efficiency. Additionally, the insulation degrades and loses its effectiveness over time.

That’s why Hegland and Johnson devised the concept of insulating just beneath a house’s exterior material—like vinyl, wood, composite siding, or stucco. Their panels are made of expanded polystyrene, which has low thermal conductivity and doesn’t allow heat or cold to move through it.

“You can only get so much performance out of fiberglass insulation and vapor barriers, and it opened our eyes to the inefficiencies of how people have built for the last 30 years,” says Johnson, co-owner of Lakeland Custom Remodeling and Contracting in Lakeville. The partners initially planned to just use Energy Max to Lakeland’s advantage, but then they kept hearing from industry professionals that it was “game-changing” technology. That convinced them to incorporate as Supreme Energy Products in 2010 to sell their patent-pending product.

While working their building jobs, they opened their new business in Cannon Falls. They aim to reduce energy use in the United States, where buildings account for 42 percent of energy consumed.

Johnson and Hegland believe they have some iron-clad selling points: In addition to the panels’ energy efficiency, the material also is recyclable, reclaimable, and mold-resistant. Builders save time and money from the panels because they don’t need to complete the four-step interior insulating process; without a six-inch stud cavity, they can use less expensive 2x4s instead of 2x6s.

Johnson says that even if Supreme Energy Products captures just 0.75 percent of the U.S. residential market within the next five years, it will generate $73 million in gross revenue. “We don’t have to capture that much market share for our numbers to be huge,” he says. “We’re replacing the vapor barrier, and we’re also capturing their market share. Same with fiberglass. We wrap it all into our product.”

Those estimates don’t include the commercial market, which the partners also plan to enter. Commercial building could be quite lucrative, where projects might involve 800 sheets of Energy Max compared to 250 to 300 sheets on a home.

Supreme Energy Products is well on its way to getting its panels into the commercial and residential marketplace thanks to its Minnesota Cup division win, says Johnson. The company now has funds to get certifications and guide specs written so that architects can specify Energy Max on their blueprints.

“I know it’s a clichÃ©, but we want to revolutionize the construction industry,” Johnson says. “Now we have a product that saves time, it’s cost-effective, and it has multiple advantages. We feel we have a game-changer.”