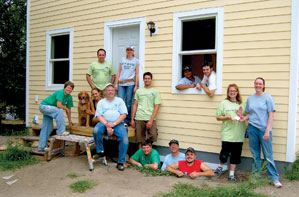 Anyone who is worried that the younger generations might not carry on Minnesota’s deeply rooted traditions of philanthropy need not be concerned. From Generation Xers down to Millennials, giving back is a tenet they wholly embrace. But it’s the way they engage in philanthropy that is shaking up the nonprofit world and sparking changes in how organizations take advantage of their time, talent, and treasure.

“The younger people want to actively participate in the places they give to, where possible,” observes Nathan Dungan, founder and president of Share Save Spend in Minneapolis, which teaches healthy money habits to youth and adults. “I describe it as experiential philanthropy. They want to do both time and money. They also are a knowledge generation, and they want to know how the money is being used.”

In contrast, members of older generations tend to align with bedrock organizations and stick with them for years. Often these Baby Boomers and Traditionalists aim to build strong institutions that deliver services to the community—such as addressing human needs, nurturing the arts, or supporting recreation—and they give to further those causes, says Bill King, president of the Minnesota Council on Foundations.

Local organizations are increasingly paying attention to those differences and seeking new ways to connect with younger audiences.

More frequently nonprofit organizations and businesses are turning to the Internet to engage the younger generations. Called e-philanthropy, this approach allows donors or volunteers to sculpt their giving experiences so that they can easily link with their interests. Philanthropists also can help specific people around the world and see their money make an immediate difference.

“E-philanthropy is pretty fundamentally changing philanthropy as we know it. It’s still a tiny percentage of giving overall, but it’s where all the growth and enthusiasm is,” notes Jennifer Ford Reedy, vice president of strategy and knowledge management at the St. Paul Foundation and the Minnesota Community Foundation. “You’ll see it affecting everybody in philanthropy sooner rather than later.”

Web sites are popping up that connect donors with individual recipients—including teachers in rural Minnesota and entrepreneurs as far away as Afghanistan or Mali.

“It is using an impersonal technology to make far more personal connections than you used to be able to make,” says Reedy.

For example, the site volunteermatch.org connects willing volunteers with organizations. After a user enters his or her zip code and area of interest, the site compiles a list of possibilities.

Kristin Redmond, a sales and marketing consultant with Ameriprise Financial in Minneapolis, started volunteering for the Minnesota Women’s Caucus and other groups through the site. A volunteer for many organizations, Redmond believes she can make a bigger difference and a richer connection by giving her time—and eventually her money.

“I find that doing this volunteering is a bit more fulfilling because you are spending your time in the benefit of others while also improving your own outlook,” says Redmond, a Millennial. “You actually get to see what’s happening, and it’s much more hands-on.”

Organizations in Minnesota have started getting on the e-philanthropy bandwagon in search of ways to more deeply connect with potential donors and volunteers. For example, visitors to the Goodwill/Easter Seals Minnesota Web site can read the success stories of clients it helped—through its job consulting or job equipment services—and then donate to those specific programs. Or people looking to volunteer can search the site for opportunities categorized by working with people, providing behind-the-scenes assistance, group projects, or special projects, and then fill out an application.

E-philanthropy is just another way to link with donors, who are becoming more sophisticated about how they engage with nonprofits, says Jim Thalhuber, Goodwill’s vice president of development and marketing. It’s also a technique to attract donors and volunteers in an ever more competitive nonprofit marketplace.

This holiday season, Greater Twin Cities United Way tested another way to connect with potential donors through its first viral video campaign. Called Give5Now, the organization e-mailed a one-minute video to members of its network asking people to give just $5 (or more) and to spread the word to five friends. The video, which ultimately raised $18,000, emphasized that big problems are affecting people across the metro area and even a small donation can make a big difference. The campaign successfully attracted new donors: Eighty-five percent of Give5Now donors had never before given to United Way.

More local e-philanthropy efforts are on the horizon. Notably, the Minnesota Community Foundation is working with other nonprofits and foundations to create a local portal where people can search nonprofits by location, cause, and target audience. Information about programs run by multiple organizations might pop up with videos and news about the work they are doing.

“It’s a great way for donors to find nonprofits they wouldn’t have otherwise and, for nonprofits, there is a much lower cost to do fundraising,” Reedy says.

Corporate gets in the game

Even local businesses are trying new ways to engage their employees in volunteerism, fundraising campaigns, or companywide philanthropy. Ameriprise launched a volunteer portal in 2007, an Intranet site that it likens to e-Harmony for volunteers, says Brian Pietsch, vice president of community relations.

Employees fill out a profile that outlines their areas of interest and availability, and Ameriprise plays matchmaker by lining them up with groups. Through the portal, nearly 1,900 employees pair up with organizations, schedule volunteer activities, or publicize and coordinate internal philanthropy projects.

“The next generations look at technology as a given in anything they do, and we help make it easy for them with the Volunteer Portal,” Pietsch says.

Redmond uses the portal to look up new volunteer opportunities and track her volunteer hours online so that she can qualify for Ameriprise’s double donation match. She also posts volunteer opportunities for causes she champions including Common Hope, which addresses health, housing and education needs in Guatemala. She used Ameriprise’s portal to enlist other volunteers and eventually coordinated an eight-day relief trip to Guatemala.

“It really made volunteering simple,” says Redmond. Since she began using the portal, she has increased her volunteering by about 20 percent and added new organizations like the Minneapolis Crisis Nursery and Hearts and Hammers.

And that’s what the future of giving is all about.

In the continuing effort to make their case to potential donors and policymakers, nonprofits have started using business terms to describe their work. It’s another way that philanthropy is changing. Instead of just appealing to the generosity of potential donors, they are utilizing sophisticated research methods to gauge the social return on investment (ROI) a donation can reap.

Social ROI studies help answer a common question from many philanthropists: If I give you money, does it really help? Wilder Research, an arm of the Wilder Foundation in St. Paul, has pioneered social ROI studies. It involves doing a complex analysis by detailing and measuring various likely outcomes and then comparing them to a program’s total cost, explains Paul Anton, Wilder’s chief economist.

For example, Anton completed a social ROI analysis of at-risk youth intervention programs that provide counseling and mentoring. Every dollar spent on these programs yields $4.89 in benefit. This stems in part from reducing truancy and increasing graduation rates, which in turn creates higher-income wage earners who pay more taxes. Another study found that Minnesota’s specialized drug courts for adults produce $5.08 in benefit for every dollar the state spends to operate them.

“The whole idea is to use the language of business and the vocabulary of finance to analyze programs or policies that have usually been defended or assessed mainly on the basis of compassion,” Anton says. “It answers the question of who does the most efficient job of getting a bang for your buck when you’re faced with two or 10 meritorious uses of your philanthropic dollar.”

It also can help win the hearts and minds of legislators. Anton saw that at the state capitol when the Youth Intervention Program Association used Wilder’s social ROI research to make its case for increased public funding. After Anton and others testified before the Conference Committee on Public Safety using the ROI information, lawmakers boosted funding for these organizations by 50 percent in a tough budget cycle.

“Legislators definitely felt that it helped them make their case that they were using the public dollars effectively, and it was worth the money spent,” Anton says.

At Goodwill/Easter Seals Minnesota, the organization has seen the writing on the wall regarding social ROI as foundations, corporations, and individuals increasingly request this type of information. While the organization has long measured outputs (numbers of people served) and outcomes (jobs found because of its programs), it hopes to team with an organization like Wilder to procure numbers that illustrate Goodwill’s concrete effect on the community—whether it’s in the form of less government spending or more taxes paid by newly employed clients, says Jim Thalhuber, vice president of development and marketing.

“Donors want their dollars to help someone. Having the numbers there, we can tell them it’s a good investment. It works and we can show them how it works. We hit their head and heart at the same time,” Thalhuber says. “It’s definitely the wave of the future.”