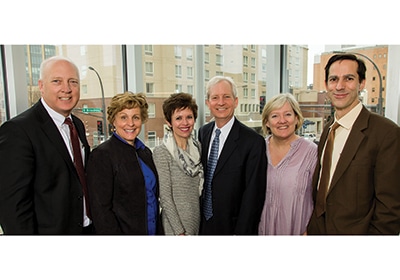 Financial planners Greg and Jeff Carlson enjoy giving so much, they made it a key part of their for-profit’s business model.

The Carlson brothers founded the financial firm in 1987.

While growing their Northfield-based Carlson Capital Management LLC over the past 30 years, they focused on providing philanthropic and charitable planning for their clients, who often were first-generation wealth accumulators active in philanthropy.

Today, the firm manages $1.5 billion in assets for more than 800 clients. Its retention rate is 99 percent, and it has a long list of awards for quality service. It has been ranked a top wealth management firm by CNBC, based on metrics including average account size, growth of assets, and assets under management.

Many of CCM’s clients operate charitable trusts, which provide them with both an income stream and money to donate to causes they believe in. CCM founded the American Center for Philanthropy, a separate entity that provides clients an option in managing philanthropic endeavors. Since its inception in 2002, ACP has given more than $50 million to charitable organizations.

Before starting their own firm in 1987, the Carlsons worked as commission-based advisors for what is now Minneapolis-based Ameriprise Financial Inc., then managed satellite offices in Wisconsin and Minnesota for Atlanta-based FSC Securities Corp. Though the brothers operated on a commission basis when they launched CCM, their goal was to shift to a fee-based business, so they could focus more on their clients’ long-term financial requirements. Getting there took more than a decade.

“We worked hard, and we didn’t care who generated the commissions,” Greg Carlson says. “Revenue went into one pot, expenses came out of one pot, and we split the rest. . . . By 1998, we were at the spot that we could turn the fee-based light switch on entirely.”

“The Carlsons are always trying to improve their firm, even though they are already a successful business,” says Mark Stadtlander, Foster Group’s CEO and president. One of ZAG’s best-practices states that advisors should have their own financial plans drawn up by an outside advisor. Several Foster Group advisors have chosen to work with CCM, Stadtlander says.

Besides advising clients, CCM also pursues its own philanthropic activities. CCM and several other ZAG firms have “adopted” a small rural community in Guatemala, assisting residents on various economic, education and health development projects. And each holiday season, CCM asks its clients to help the firm allocate $10,000 by nominating charities.

“We enjoy being in the philanthropic space,” Greg Carlson says. “It’s good for business and it’s good for society.”

Last year, employees were given a share of stock based on their tenure.

In 2016, Carlson Capital Management gave all employees who had been with the company for a year or more shares of dividend-paying stock in the company based entirely on tenure. The firm’s corporate administrator, was given the most stock for her 20 years of service.

“They deserve it,” CEO and co-founder Greg Carlson says. “They are so important and integral to the success of the firm.” When employees retire or leave, they must sell their stock back to the company, but they retain the proceeds. The financial services firm also allows senior-level employees to buy additional stock in the company and will give more stock to employees in the future, Carlson says.