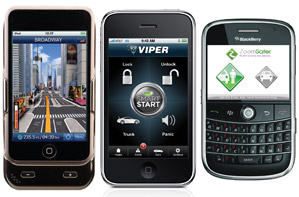 This year’s must-have car accessory: a smart phone. Smart phones have made major inroads with dashboard technology. Several downloadable navigation systems—some of them free—now threaten the standalone GPS device industry. One of the most praised products is the Dual GPS Navigation Solution, a car mount and cradle that turns an iPod Touch into a turn-by-turn navigation system using the Dual’s free NavAtlas program from the App Store. At $199 (not including the iPod), it’s a bit on the expensive side. A thriftier option: queuing up the Google Navigation app on any Android phone and affixing the device to a hands-free car mount from Clingo ($34.99).

There’s now an app for warming up your car on those bitter cold winter mornings. The Viper SmartStart works the same as any other remote-start system. Only instead of using a bulky keychain device to trigger the start, you use an app on your iPhone, Blackberry, or Droid. The system retails for around $499. It also requires a $30-per-year service plan. The mobile application can be integrated with the company’s car security systems, too, so you can receive alerts on your phone whenever someone tries to break in—or bumps it with a shopping cart.

The smart phone is a dangerous passenger. With every chirp, it’s hard not to want to scoop it up off the passenger seat and skim your inbox just to see who’s messaging. ZoomSafer does away with the temptation. The smartphone app senses when it’s in a moving vehicle and disables most of the phone’s features. Inbound calls can still be received via a hands-free speakerphone, but the software suppresses all text and e-mail alerts and blanks out the screen until you’ve arrived at your destination. The company offers a FleetSafer version for businesses to install on company-owned phones.