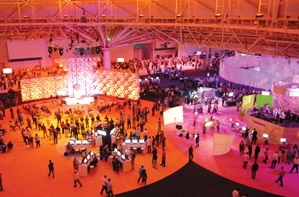 After Massachusetts-based Boston Scientific acquired Guidant Corporation in 2006, its two Twin Cities divisions remained largely separate. Recently the company merged the units to create the Cardiology Rhythm and Vascular (CRV) division, and Boston Sci wanted to get its 5,000 Minnesota employees united behind the new entity.

The company called on Cheryl Kranz, owner of Minneapolis-based Creative Events by Kranz, to plan the CRV Experience, a day-long event that would tell the story of CRV to local employees and get them excited about their new division. In 11 weeks, she had to pull together a team and plan an extravaganza at the Minneapolis Convention Center—an effort that typically would take 11 months.

The main goal was to build trust in the company’s remote top executives—including CEO Ray Elliott—spell out the vision and objectives for the new division, and highlight Boston Scientific’s commitment to its employees, health care providers, and patients. But the company didn’t want a typical meeting where leaders stand at the podium and deliver a message.

The CRV Experience needed to be interactive, educational, fun, and engaging, while also forming a bond between its Arden Hills and Maple Grove employees. Though the day-long event did start with a general session with Elliott and CRV President Hank Kucheman, their talks were followed by several moving testimonials from patients explaining how Boston Scientific medical devices had changed their lives.

Next, the attendees moved into the 200,000-square-foot exhibit hall. There were three main areas, reflecting the newly unveiled CRV logo: three connected circles embedded with a heart, a lightning bolt, and an infinity symbol.

The orange circle area, featuring the infinity symbol, represented communication and dialogue. Employees used computer kiosks to submit questions to company leaders and take a survey about what they had learned from the first general session.

In the pink commitment circle area, featuring the heart symbol, employees encountered an elaborate chandelier hung with crystals featuring 1,500 pictures of CRV employees. “The photos were incredible,” Kranz says. “It was a real graphic depiction of what was needed to kick off the new division and move forward into the future.”

Also in the commitment circle, employees were invited to pose in group or individual pictures or shoot video on Web cams. Called E-Tube, the videos expressed employees’ commitment to the company and its CRV vision.

Patients were the focus of the purple circle area, featuring a lightning bolt. Designed in a labyrinth, the area featured patient photos and stories about the ways they’ve benefited from Boston Scientific devices. “It reinforced that the company saves lives,” Kranz says.

Other areas offered health care screenings similar to ones Boston Scientific regularly holds in neighborhoods around the country, as well as a spot where staff demonstrated CRV products. Another area featured a display illustrating Boston Scientific’s commitment to reaching out to the community through employee social clubs and diversity groups.

Kranz used other interactive elements to foster communication between employees. One popular activity involved 12 buttons with catchphrases from different departments scattered throughout the hall; employees had to visit all the exhibits to amass a complete set. And then there was the food. The planning team created a menu that reflected the cultural backgrounds of CRV’s employees, including Southeast Asian, Indian, Mexican, and American fare.

In the afternoon, employees reunited in a town hall meeting with Elliott and other leaders. The executives spent time answering questions submitted via kiosk at the CRV Experience and prior to the event. “I think what made the CRV Experience so successful was the two-way communication between the leadership and the employees,” Kranz says. “It was a conversation.”

“It was intended to be very interactive,” Mirviss says. “It was a really important milestone for our company and for our employees in the Twin Cities.”