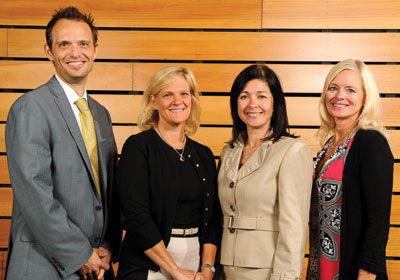 Marie Johnson created a non-invasive way to detect coronary artery disease in order to prevent more spouses and children from having to live without a loved one. It’s a painful existence, and she should know—her husband died at 41 from a heart attack attributed to blocked arteries.

After years of research, three post-doctoral fellowships, and extensive testing, Johnson invented a handheld device that can detect clogged arteries in less than 20 seconds. She developed a signature algorithm that is a strong indicator of blockages or narrowing of the arteries.

Every year, 1.1 million Americans have a documented heart attack and 350,000 succumb to sudden cardiac death. One major heart attack culprit, blocked arteries, is sometimes difficult to detect through traditional measures like stress tests—and more accurate diagnostic tools can cost thousands. That’s why AUM’s CADence device is especially critical, says Johnson, a biomedical engineer who is CEO of the Northfield-based company.

“I want to eradicate needless deaths due to heart disease,” she says. “Imagine if you could detect everyone who is developing heart disease and help them start making changes right away. That’s my ultimate goal, and I can’t wait until we start seeing real changes in outcomes and people are publishing studies saying we’re making a difference.”

Some unhappy coincidences led Johnson to develop her technology. She often used her husband as a guinea pig while working on a project with 3M to create heart murmur-detecting electrical stethoscopes. Believing he was healthy, Johnson collected reams of data on his heart. When he died in 2002, she scoured the data, eventually identifying a persistent signal in his left anterior descending (LAD) artery. It’s known as the widow-maker for its lethal nature when blocked.

From her husband’s data, Johnson created the telling algorithm based on acoustic signals from a blocked LAD. Next she developed the CADence system for discovering arterial blockages in people’s hearts.

In 2007, Johnson was recruited from Stanford University to concept and then direct the University of Minnesota’s Medical Devices Fellows Program. In that role, she trained cross-disciplinary teams of scientists, physicians, and engineers to develop commercially viable medical devices. But she wasn’t making much progress on her own project. After the U passed on her technology, Johnson realized she needed to more aggressively advance the CADence device.

“I believe that everything happens for a reason, and I wouldn’t be working on this and have my husband die if it wasn’t for a reason,” says Johnson. “I had to do something to make sure that other women and kids don’t have to go through this. There is a cure, and I needed to figure out this link.”

Johnson left the U in April 2011 to work on AUM full time and built a team of 13. Earlier this year, AUM earned nearly $250,000 in grant money from the IRS, and it is about to close on its first round of equity financing.

A 330-patient study that compares CADence to a traditional angiogram is now underway at the University of Minnesota, and Johnson is confident that the results will affirm the strength of the device. It even caught blockages in a prominent Twin Cities CEO and a potential investor from North Dakota.

CADence will be ready for FDA review and clinical trials next spring, and it should be approved and ready for market by third-quarter 2013. AUM will initially sell to cardiologists, but Johnson hopes to eventually sell to other medical professionals and to consumers also.

Each test will cost about $300. Approximately two-thirds will be used to cover medical professionals’ fees associated with interpreting the results—and the remaining one-third will go to AUM.