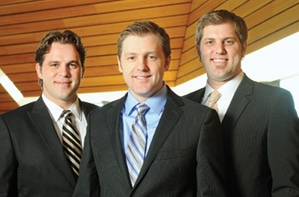 The way dentists and endodontists perform the dreaded root canal hasn’t changed much during the procedure’s 50-year history. But a trio of brothers at BioMatRx is attempting to change that by developing a process that uses stem-cell therapy to restore diseased and damaged teeth. â©

Though dental instruments have evolved over time, the general method of fixing an infected or decaying root canal effectively leaves patients with a dead tooth that is more susceptible to infection, cracking, and loss. Endodontist Todd Geisler helped advance a technique to regenerate dead roots by using patients’ own stem cells, and he enlisted the help of his brothers, Graham and Jamison, to bring the necessary equipment to market. â©

“Research shows that there are stem cells present, even in a dead root, at the tip of the root. With our product, we are basically using a patient’s human growth factors to revitalize the tooth by regenerating the root,” says Graham Geisler, chief operating officer of Edina-based BioMatRx. “This process connects the soft tissue in the tooth back to the body and the immune system, so it is actually living and can fight infection a lot easier.”â©

CEO Todd Geisler worked as a phlebotomist while attending dental school. He started putting some of that blood-related expertise to use in honing the regenerative root canal procedure. It works like this: The clinician takes a small amount of a patient’s blood and then spins it in a custom centrifuge to extract the necessary plasma and growth factors. After cleaning and preparing the tooth just like what’s done for any other root canal, the clinician then injects these biologics into the tooth to introduce them to stem cells on the tip of the root. This prompts the ailing tooth to start regenerating its tissue, which ultimately helps reconnect and revitalize the root. â©

In 2009 and 2010, Todd Geisler demonstrated the procedure at the annual American Association of Endodontists convention. The enthusiastic response he got prompted him to develop BioMatRx and its ReGendo Gel Pack, a kit that provides the necessary tools for performing the regeneration procedure. â©

The ReGendo Gel Pack sailed through the FDA’s regulatory process as a 510(k)-exempt medical device, and BioMatRx will bring it to market by early 2011. Next steps include improving the stem-cell procedure and developing a second generation of the kit, which the Geislers anticipate will be 510(k) exempt, too. BioMatRx’s third-generation product might contain biologics, including a custom cocktail of growth factors, which could make the regulatory process more complicated. â©

The Geislers believe the company will go far both domestically and beyond, thanks to the estimated 22 million root canals performed annually in the United States. BioMatRx projects sales of $3.5 million in its first year, growing to $60 million by its fifth year as the company expands to Europe, Brazil, and Japan—all areas with significant spending on endodontics, notes Jamison Geisler, chief marketing officer.â©

It’s a market that will continue to grow as clinicians adopt the stem-cell technique. And they are getting motivated to do so; 96 percent of endodontists surveyed by the Journal of Endodontics believe that they need to incorporate more regenerative therapies into their practices, notes Graham Geisler. “There is demand for it and they are the root-canal specialists,” he says. “Our ultimate mission is to provide patients with a stronger, healthier living tooth, which is a great alternative to the current process.”

Magnetic resonance imaging (MRI) is a much more effective way to detect breast cancer than a traditional mammogram, but technical challenges and steep costs have kept it from becoming standard operating procedure. MRI Robotics of St. Paul developed a robotic biopsy system that helps doctors use this more accurate technology, as well as a breast cradle that makes the experience more comfortable. â©

Blake Larson invented a way for physicians to perform breast biopsies while patients are inside MRI scanners. The technology uses MRI to zero in on hard-to-detect tumors and deploy a remote-control device to precisely aim the biopsy needle. It keeps doctors from having to do multiple needle sticks and another biopsy if they miss the desired tissue. â©

“Not only can we get better clinical results, we should be able to help hospitals save money,” says Larson.â©

He began developing the technology in 2002 as a University of Minnesota mechanical engineering graduate student. After the U passed on the intellectual property rights, he started MRI Robotics to commercialize it. Initially supported by a federal Small Business Innovations in Research grant, Larson—who is president—plans to seek additional funding to develop a prototype and conduct clinical trials. He aims to bring his products to market in three to four years.

Pramote Hochareon is so early in the process of developing his cardiac medical device that he can’t and won’t disclose many details. But he is thrilled about starting his own company, leading a team of innovators, and making a difference in health care. â©

His vision: a device that prevents heart damage from cardiac stents inserted during a heart attack. Hochareon believes that his technology can significantly lessen damage caused by the heart attack and by complications that can arise from stents—expandable, metal mesh tubes that hold clogged arteries open. “Heart attacks are a huge problem, and even though there are many treatments, there is significant room for improvement,” he says. “We have found an opportunity to improve treatment.”â©

After earning a medical degree in his native Thailand and a Ph.D. in biomedical engineering at Penn State, Hochareon came to the University of Minnesota for a post-doctoral fellowship. He worked in the medical device industry for a few years before starting Nirva Medical in Vadnais Heights earlier this year. â©

Hochareon plans to pursue government research grants to develop his concept. “I’m excited about my product; it has so much potential. It’s a simple technology but it has many clinical applications, including for strokes,” he says.