Best Public Event And Best Use Of Marketing/Graphic Design: Meghan Gustafson | The Basilica 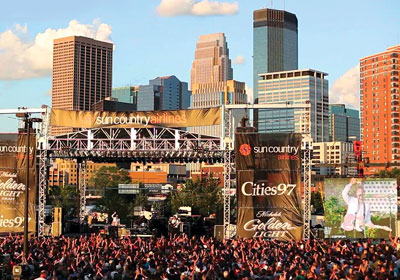 The proceeds from this annual outdoor concert are used in the restoration and outreach programs of the 100-year-old Basilica of St. Mary. The 2010 event—which featured 18 acts on three stages, including headliners Weezer, Barenaked Ladies, the Avett Brothers, and Spoon—drew 25,000 people over two days. Planners had two and a half days to build out the site, including:

• Three VIP areas and a skybox

• A backstage area with artist and production trailers

• 100 tents with tables and chairs

• Hundreds of banners and event signs

The site had to be cleared in just two and a half days to avoid interfering with church services.

The event’s tongue-in-cheek marketing campaign played off the block party’s mix of rock and religion. The message was that everyone needed to confess their musical transgressions before attending the concert, which was billed as “Your Ticket to Musical Redemption.” The print, billboard, and bus shelter ads featured copy such as “Forgive me. Deep down I really did want to hear more cowbell.” and “Forgive me. I named my first born Willi Vanilli.” Some messages were targeted directly to the heavens: One “confession” was painted over an entire rooftop. An online “confessional booth” allowed people to admit their musical sins.