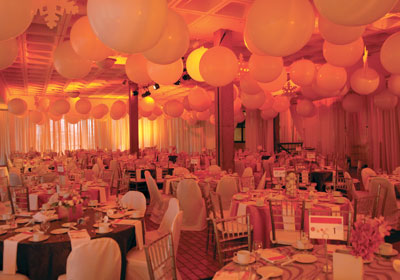 To honor significant donors, a local college puts on an annual dinner following a holiday concert on campus. The planners strive to change up the dÃ©cor for each dinner, because the attendees comprise a similar group of people from year to year. This year’s event used the idea of a circle to represent the role a donor can play in the life of the college.

Guests arrived at a pre-dinner reception featuring passed hors d’oeuvres and live holiday music. The reception room dÃ©cor included pewter-colored satin linens and large orange and white balloons. For dinner, attendees moved into a ballroom along a walkway lined with bead-filled vases, votive candles, and LED lights. The ballroom was decorated with orange, pewter-colored, and white linens; almost 200 three- and four-foot white balloons and 16 three-foot snowflakes hung from the ceiling. Because the ballroom does not have a drop ceiling, a web of more than 2,000 feet of fishing line had to be installed (a process that took more than five hours) to permit the balloons and snowflakes to hang throughout the space. Sheer white fabric drape over the walls and ceiling was lit with an orange glow.