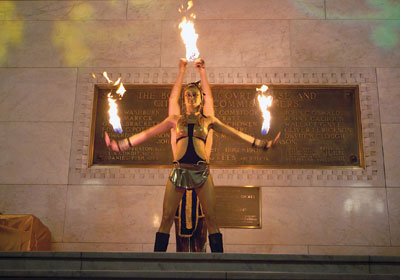 The theme of a holiday party for a social organization was “unwrapped.” The event’s entertainment was a combination of living statues and fire dancers. Guest were greeted near the entryway by three partially nude “statues,” standing on table-height platforms, painted in gold, and clothed in custom-made costumes. The costume designer created undergarments that were painted the same gold as the models and draping that evoked the look and feel of statues. Custom wigs for the female models were also finished in gold paint. During the hour-long reception, the statues only moved occasionally to drop a part of their costumes.

The models were later changed into more risquÃ© costumes and positioned prominently during dinner, where they only changed positions at 15-minute intervals. After dinner, the models slowly climbed the grand staircase. Then a pair of fire dancers in gold body paint and black and gold costumes—a man carrying a woman wrapped in gold fabric, with only her hands and toes exposed—came down the stairs. The man unwrapped the woman, and they lit their wands and performed for the guests. The planners scheduled repeated rehearsals to ensure each part of the performance worked smoothly and safely.