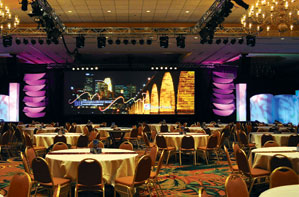 A financial services company needed to hold an entertaining conference with a much smaller budget than in previous years. The client chose “The Seasons of Minnesota” as the theme. Two video monitors, mounted into custom-built displays of Minnesota artwork, displayed daily schedules and announcements for guests.

In the general session ballroom, curved white panels, white spandex columns, and S-shaped fabric walls flanked the main stage and served as projection screens for lighting and as props for the presenters. In the center, a 40-by-20-foot rear-projection screen displayed hours of custom video produced for the conference programs. Planners coordinated video production, stage design, lighting, sound, and live camera operation, and also provided dÃ©cor and entertainment for the final night’s dinner party.

For the final banquet, the room was divided into four areas, each decorated to represent one of the four seasons. Each area had food, entertainment, and a bar designed to match the season theme. The stage was given a Minnesota woods theme and featured a local band.