This collegial CEO configured century-old Piper Jaffray Cos. to prosper during tumultuous times in the financial services industry.
April 01, 2020 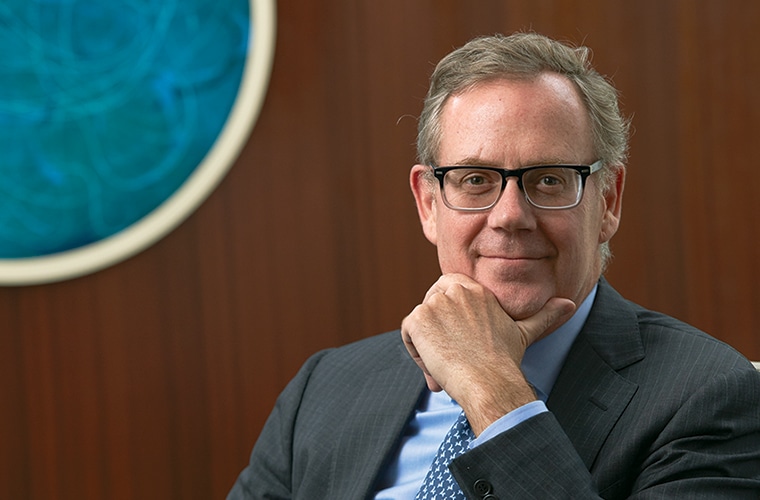 In the mid-1990s, Andrew Duff attended a roundtable of top executives from independent investment banks, which are typically located in regional business centers across the country. Thirty-five of them, in fact. This spring, he accepted an invitation to go again. Just 10 signed up. Consolidations and failures have taken out many of these off-Wall Street firms. But not Minneapolis-based Piper Jaffray Cos. (NYSE: PJC), where Duff retired as CEO at the end of last year, after 18 years in the role.

Indeed, many credit Duff’s focused planning and calm leadership for the survival and success of Minneapolis’ most enduring homegrown financial services firm. His decision in 2006 to sell the company’s retail brokerage business to Swiss giant UBS AG for $750 million gave Piper a cushion of capital to weather the ferocious financial crisis. It also allowed Piper to emerge from that crisis armed with a treasure chest to tap for a string of key acquisitions that strengthened its position as an investment bank with specialties in public finance and energy. What’s more, Piper was named one of Forbes’ 50 most trustworthy financial companies in 2015 and again in 2017.

And speaking of investments: Its five-year total shareholder return through 2017, 174 percent, put the firm in the top quartile of its peer group.

Richard Davis, CEO of U.S. Bancorp from 2006 to 2017, was a colleague of Duff’s when U.S. Bancorp owned Piper, and he points to Duff’s management style for much of Piper’s success. “He’s collaborative,” Davis says. “He’s thoughtful, humble, a remarkably gentle leader.” Davis likens Duff’s style to that of an orchestra conductor—carefully blending the different sounds produced by a stage full of musicians into a polished symphony.

Duff, Minneapolis born and raised, connected with the august Minneapolis financial firm early on. “As a teenager, I started talking to my parents about the market,” he recalls. “I had some money left over from my summer job, a pool cleaning business. A family friend was a broker at Piper. He sat down with me and my $600 and came up with three choices. I picked the IPO of Cray Research.” It turned out that the Twin Cities supercomputer maker, which went public in 1976, was about to take off on a decade-long run as one of the market’s top performers. “I thought I was a brilliant and natural investor, based on one lucky investment,” Duff quips.

Duff landed a job at Piper soon after graduating from college. He started out as a bond salesman, calling on community bankers in rural Nebraska, later becoming manager of a 20-person sales group. In 1994, he moved into senior management—just as Piper faced one of its worst-ever crises. Many of its investors, beneficiaries of explosive gains thanks to portfolio manager Worth Bruntjen’s aggressive investing strategies, suddenly faced huge losses. Bruntjen had bet heavily on falling interest rates. Instead, they rose.

“We’d been financially stressed, and this great reputation was going through a hard phase,” Duff recalls. “Even though we had misstepped, [clients] saw it in the context of a firm they trusted.” Piper worked through the mess, but many analysts said Piper was so weakened that it had to find a buyer.

In 1998, with financial industry deregulation allowing commercial banks and investment banks to combine, the firm was acquired by Minneapolis-based U.S. Bancorp. “One of my biggest surprises was a big change in the competitive landscape,” Duff recalls. “Very quickly, the industry started consolidating.”

The U.S. Bancorp-Piper marriage wouldn’t last. Duff noticed that selling products such as mortgages and credit cards wasn’t working well for Piper. “We had a lot of capabilities, but they were totally disconnected, and the client had to put them together,” he says. In 2001, U.S. Bancorp itself was acquired, by Milwaukee-based Firstar. The merged entity kept the U.S. Bancorp name but decided that Piper no longer fit. So in 2003, Duff became CEO of an independent Piper Jaffray. Not wishing his firm to be as vulnerable as it had been in the late 1990s, Duff went to work reinventing Piper to prosper amid the tumult shaking the financial services industry—tumult that would turn into a tsunami starting in 2008.

One of his biggest moves was to sell Piper’s retail brokerage business in 2006. Those 110 brokerages, located largely in the western third of the country, accounted for more than half of Piper’s business, and the sale knocked Piper off of the Fortune 500. But Duff knew that his firm didn’t have the scale to compete with far larger rivals such as Merrill Lynch and UBS. “Gosh, we had 850 advisors,” Duff recalls. “Many firms had 8,000.”

By shedding its brokerage unit, Piper could now focus on investment banking, expanding its existing health care and consumer businesses, and growing its M&A practice. That deal also cleared the way for Piper to hit the acquisition trail. Two of its most successful acquisitions were Advisory Research, a Chicago asset management firm, in 2009 and Simmons & Co. International, a Houston investment bank specializing in the energy industry, in 2015. A third, Seattle-Northwest Securities, strengthened Piper’s already hefty public-finance presence as an advisor to hundreds of government agencies, school districts, hospitals, and senior living facilities.

Not everything worked. In 2007, Piper purchased Goldbond Capital Holdings in Hong Kong. Five years later, Piper shut it down. “It was really a complete failure,” Duff says. “We were plainly over our skis.” He cites several reasons. For one: Piper, which had believed it could do business around the world based on the work of its London office, found that time zone differences between the U.S. and Asia stretched its capacity. Analysts also cited Piper’s failure to properly evaluate the risks involved in the venture.

Still, Duff says that the Goldbond experience taught Piper to focus primarily on the U.S., which provides the overwhelming portion of its revenue and prospective growth. (Piper Jaffray still maintains an extensive overseas presence, including a Hong Kong office, mostly for U.S.-based clients that have operations outside North America.) Meanwhile, Piper’s more successful acquisitions also drew scores of talented, experienced hands to the company. Duff’s friends say that he has typically demonstrated a special touch for getting the best out of them and the rest of his employees.

Ray Barton, the longtime CEO and now chair of Bloomington-based Great Clips, met Duff 20 years ago. They became close friends. Eleven years ago, a private equity firm that held a significant stake in Great Clips began pushing the company to sell to an outside buyer. Barton opposed that move, but his initial reaction was too emotional. He asked Duff to help him think through a reasoned response. With Duff’s guidance, Barton went on to execute a management-led buyout that kept him and his partners in control. “He doesn’t get rattled,” Barton says.

Duff also has won praise for his sustained efforts to elevate the role of women at Piper Jaffray. As part of the leadership change triggered by his retirement last year at age 60, Debbra Schoneman succeeded him as president. (Duff’s successor as CEO is Chad Abraham, who, like Schoneman, is a 28-year Piper veteran.) “I believe women frequently have a different perspective,” Duff says. “They hear and see things differently and look at risk differently.”

Duff acknowledges that “we had our hiccups.” That said, he believes, “I got more things right than wrong.”

1957 – Born in Minneapolis.
1980 – Graduates from Tufts University with bachelor’s degree in economics; joins Piper Jaffray.
1994 – Named manager of institutional sales and trading, and director of fixed-income capital markets.
1996 – Becomes president of Piper Jaffray.
1998 – Piper Jaffray acquired by U.S. Bancorp.
2000 – Assumes role as CEO.
2003 – U.S. Bancorp spins off Piper, returning the firm to independent status; Duff continues as president and CEO, also assuming the role of chair.
2006 – Piper sells its retail brokerage business to UBS.
2017 – After hitting a low of $16.99 per share in 2011 in the wake of the financial crisis, Piper stock (NYSE: PJC) rebounds to $86.25.
2017 – Retires as CEO and president at year’s end; remains chair.