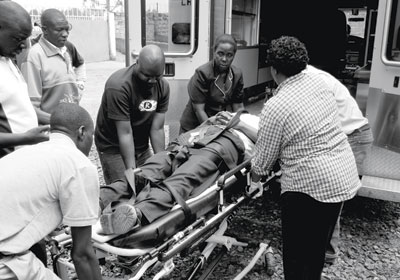 As an EMT-paramedic and operations manager at Allina Health, Jeff Lanenberg is used to dealing with crisis situations. But he says a trip to Kenya in July 2011 as part of the health care provider’s Mission Matters initiative put things in perspective. Minneapolis-based Allina had donated an ambulance and medical supplies to Eldoret, Kenya, a sister city of Minneapolis. Before Lanenberg and leaders from the Minneapolis Fire Department flew there to train first responders, they learned that in Eldoret, it is not uncommon for new mothers to abandon unwanted newborns in pit latrines out of desperation. If first responders found a baby with a chance of surviving, they’d jump into the hole and soon be up to their armpits in human waste. The Twin Cities team trained local firefighters to put responder safety first, using a pulley-type system that would lower the responder into the hole to rescue the infant quickly and safely.

Lanenberg says he was struck by how little material things mattered to the people he met. Just being among them for a short time, he says, “made me appreciate even more what I have here.”

Launched in April 2011, Mission Matters’ other key programs, Dollars for Doers, and Walks, Runs & Rides, enable employees to direct charitable contributions to the local causes of their choice through active volunteering. “In October and November, we collect used and broken bikes,” says Brian LaCroix, president of Allina Health emergency medical services. “Volunteers from Allina fix them up and then distribute them to needy kids and adults in the community,” in partnership with Free Bikes 4 Kidz. Many of the recipients are immigrant families.

Allina Health operates a network of hospitals, clinics, and pharmacies throughout Minnesota and western Wisconsin and tailors its outreach work to the communities it serves. For example, Allina offers nutrition classes in the Phillips neighborhood of Minneapolis, where there is a large concentration of East African immigrants, while a free clinic in the Owatonna area touches the lives of many migrant workers.

Walter J. Duffy Jr., a former city attorney of Minneapolis now in private practice, nominated Allina Health for the award, noting the health provider’s practice of reaching out to newly arrived immigrants for both patient care and employment.

As a not-for-profit, Allina Health is required by the IRS to provide benefit to the community that’s equal to or greater than what it would receive if the organization paid taxes. In 2012, its contributions added up to $478.1 million, well beyond what is expected. The organization’s dedication to improving community health was one reason it changed its name from Allina Hospitals and Clinics to Allina Health in February 2012, says Ellie Zuehlke, director of community benefit and engagement: “Our organization is about more than just taking care of you when you’re sick. It’s about helping to keep people well, even if you’re never our patient.”