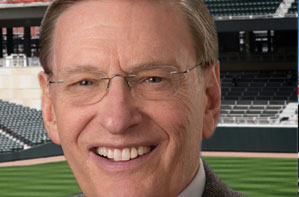 Highlight: Breaking the stadium debate gridlock, risking his local popularity in the process

Major League Baseball Commissioner Bud Selig’s stock has risen and fallen over the years with Twins fans. It reached a low point in late 2001 when he announced that Major League Baseball was looking to eliminate two teams. Word quickly spread that Carl Pohlad—whose efforts to get a new stadium built had long been stymied—had volunteered the Twins to be one of them.

In a lawsuit that followed the next year, the Metropolitan Sports Facilities Commission, which owns the Metrodome, won a Hennepin County Court ruling forcing the Twins to honor their lease to play in the Dome for the 2003 season, effectively blocking Selig’s contraction plans. At that point, the commissioner’s name was mud with the fans and many legislators, who accused him of blackmailing the state. But his actions were also credited with putting urgency into the gridlocked stadium debate.

Before and after the contraction episode, Selig’s overriding concern was to make sure that every Major League Baseball team has a viable venue. In that respect, the commissioner was Target Field’s earliest and most consistent backer, says Twins co-owner Jim Pohlad.

“[Selig] was an undying supporter of the effort,” Pohlad says. “Even in the darkest days, as Major League Baseball might have viewed them, when it seemed like it wasn’t going to happen, the commissioner never gave up.

“He came to the Twin Cities a number of times and really become part of the process to make Target Field happen,” Pohlad adds. “Some of those visits came at horrible times, when there was a lot of fighting going on and the team wasn’t doing well.”

At Target Field’s August 30, 2007, groundbreaking, which Selig attended with Carl Pohlad, Selig confirmed that the Twins’ future had depended on obtaining the new ballpark, saying, “They couldn’t survive [in the Metrodome]. I know people don’t like to hear that, but it isn’t hard to figure out.”