Twin Cities Business and its sponsor partners recognize these successful Minnesota family businesses and the values they perpetuate.
April 01, 2020 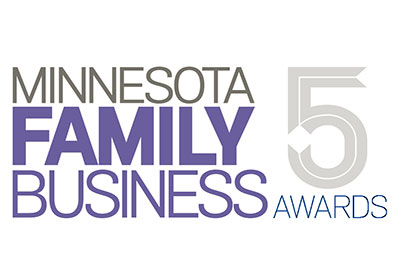 The Roach family purchased Computype from American Can Co. in 1975. It then transformed the business from a printer of library-book bar codes to a diverse identification company whose labels track blood supplies, truck and car tires, and cancer-screening slides throughout the world. Three-quarters of Computype’s revenue now comes from outside the United States; it operates three manufacturing plants, including one in the U.K. The company is proud of a number of innovations, including labels that can withstand vulcanization, and sequentially numbered bar-code labels for blood bags. The Roach family recently completed the transition of Computype’s leadership from the first to second generation. Family values: The Roach family and Computype contribute to and volunteer for numerous charitable efforts, including Feed My Starving Children, Second Harvest food shelves and the British Heart Association.

How do you differentiate your pizza restaurant chain from all the others? By offering much more than pizza. In the Twin Cities area, Davanni’s is also known for its hot hoagies and a menu that includes pasta, salads and desserts. Eat-in, take-out and delivery service is provided. The chain’s first restaurant, originally called Pontillo’s, opened at Grand and Cleveland in St. Paul (it took its current name in 1983). Including its original location, Davanni’s now has 22 locations, all in the Twin Cities metro; its newest opened this past summer in Chanhassen. Each Davanni’s strives to maintain a family-friendly neighborhood-place atmosphere. Cofounder and owner Mick Stenson is transitioning the business to his two daughters, Kristy and Katie.

Family values: This chain emphasizes locally based and locally focused charities, including Helping Paws, which trains service dogs for people with PTSD, as well as others in need. Another charity is the Food Group, an emergency food shelf; Davanni’s customers who bring in three healthy-food items receive a free one-item pizza.

This small-town trucking company has many big-name clients, including Hormel, Cargill, Kemps and Schwan’s. Its specialty is refrigerated and dry-freight services, and its market has expanded from the Midwest into the Mid-Atlantic, South and Southwest. Each of the three Kottke brothers who now own the business (they represent the family’s third generation) has a special talent—communication skills, mechanical prowess or finance. Since 2011, Kottke’s total operating income has increased 11.2 percent per year on average. Net income from operations increased 14.6 percent from 2013 to 2014. Family values: Among the causes that the family support with time and treasure are college scholarships for local students, the American Cancer Society’s Relay for Life and the Minnesota Trucking Association’s Trucks and Toys holiday gift event.

Founded as Maplewood State Bank, Premier now has 19 branches throughout the Twin Cities metro area. Founder Donald Regan remains chairman; members of his family’s third generation are now involved in the business. Like all banks, Premier saw asset losses during the last recession. But in the past three years, loans have grown 19.83 percent, and assets have grown by 5.76 percent. During good years, the banking company has a profit-sharing program: In 2014, profit-sharing contributions as a percentage of gross wages were 12.74 percent.

Family values: The Regan family has been particularly involved in programs that promote cross-cultural understanding throughout the world. Contributions and bank-employee participation support schooling and medical services in Venezuela and nine other countries in Latin America, Africa and Eastern Europe.

E. J. Stearns acquired a Hutchinson lumberyard in 1892. He and succeeding generations nimbly adjusted to changes in the building market, growing the business into a full-service lumber company and a manufacturer of cabinets, windows and boats. In 1972, the family shifted to a new line—wooden shipping containers and packaging materials. Stearnswood soon added heavy-duty fiberboard cartons to its product mix. The fourth generation of the Stearns family is now grooming a fifth for leadership.

Family values: In 1988, the family founded the Stearns Foundation. Its endowment is used to aid various charitable and social activities, including the Hutchinson Center for the Arts, the Hutchinson Fire Department and Crow River Habitat for Humanity.