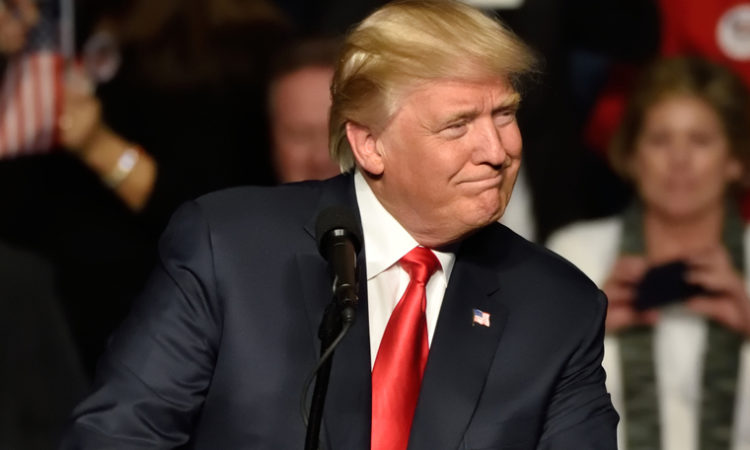 More and more Range residents have been crediting Trump for any boost the mining industry has recently received.
By Gene Rebeck
June 21, 2018

President Donald Trump’s rally in Duluth yesterday attracted thousands of fans from all over Northeastern Minnesota (and beyond), an abundance of protesters (mostly peaceful, a few verbally aggressive) and perhaps a dozen vendors of Trump memorabilia (and bottled water—it was a hot day by Lake Superior).

Trump came to Duluth to rally support not only for his policies but for Pete Stauber, who is running for the U.S. Congressional seat in Minnesota’s Eighth District. The seat is currently held by DFLer Rick Nolan, who is retiring. It has long been a Democrat-held seat. The only Republican to win the district, Chip Cravaack, won in 2010, then lost to Nolan two years later.

But the president believes that this DFL dominance in an area traditionally known as a labor stronghold could change this year. That could be more than partisan optimism. While the Range went for Hillary Clinton in 2016, Trump carried Hibbing, the area's largest city, and several Range precincts. What’s more, Trump won the entire Eighth District (which extends far south of the Range), reliably Democratic in the past.

Trump’s appeal to the Range is undeniable. His decision to impose a 25 percent tariff on most foreign steel is seen as a significant boost to the region’s economy. Many Northeastern Minnesotans believe that Trump is more consistently and more effectively supportive of mining, a feast-and-famine industry for the past few decades, than the Obama administration.

“Thank you for your efforts on trade enforcement, domestic job creation, and mining. Minnesota’s mining industry appreciates your support,” read a full-page, four-color ad in yesterday’s Duluth News Tribune. The ad was sponsored by two organizations: the Iron Mining Association of Minnesota and Mining Minnesota, which represents businesses and others that support nonferrous mining in the northern part of the state.

And a couple of hours before the rally, Trump led a one-hour “roundtable” on mining at the Lake Superior Warehousing facility at the Duluth Seaway port. In addition to Minnesota congressmen Jason Lewis and Tom Emmer, the roughly 200 attendees included mining company executives, industry employees, representatives from other businesses and Iron Range politicians. The President played to a supportive audience at the roundtable. Speakers praised his tariffs and his efforts to ease restrictions on copper-nickel mining.

Iron Mining Association president Kelsey Johnson, who sat near the president at the front table, told TCB this morning that the mining industry has reasons for feeling upbeat. The reopening of U.S. Steel’s Granite City, Illinois plant has helped boost taconite demand. A number of pellet plants, she adds, are creating new jobs—“and these are well-paying jobs.”

Another roundtable attendee, Ray Klosowski, president of the Duluth Seaway Port Authority, noted that businesses other than mining in and around Duluth are generally sharing the mining industry’s economic optimism.

To be sure, some Northern Minnesota businesses not involved in mining worry that the tariffs will raise their own costs—and incite retaliatory from countries (notably Canada) where they have customers. But while the increasingly automated iron-mining industry employs far few people than in its postwar heyday, its economic and psychological impact on the Northern Minnesota economy remains large.

And it appears that more and more Range residents are willing to give Donald Trump the credit for any boost the industry is experiencing. He’s a Republican, but one willing to overturn Republican orthodoxy regarding global trade. What’s more, many in Northern Minnesota believe that the DFL party is increasingly dominated by anti-mining environmentalists and metro-area and Duluth residents with values inimical to theirs.

To Aaron Brown, a longtime Iron Range journalist and teacher, the increasing openness of this union stronghold to a Republican president’s message also reflects a cultural shift in his region. “People are far removed from the striving of immigration and the labor movement,” Brown notes. “There’s nobody alive now who lived through that. So now they’re thinking: ‘What about my job? What about my world? How is it going to be protected?’”

The Iron Range, Brown adds, “is its own culture, its own place. We’re a politically contained world north of Duluth. We’re not rural, exactly. We’re Rust Belt in the middle of the woods.” So it shouldn’t surprise metro-area residents that Trump’s message of making mining great again is getting a supportive listen.