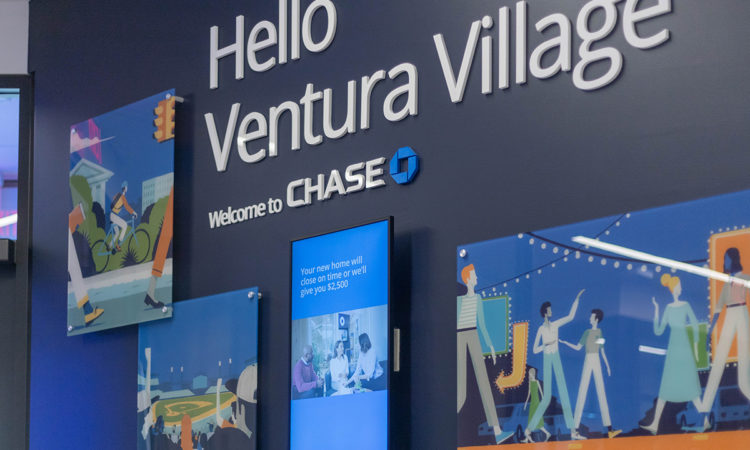 The new branch is at 1100 East Franklin Avenue in the Ventura Village neighborhood of south Minneapolis. JPMorgan Chase

But on Tuesday morning, the company opened up a new Chase Bank branch in what, at first glance, might seem like an unlikely location for the financial powerhouse. Chase’s newest Twin Cities branch is located at 1100 East Franklin Avenue in the Ventura Village neighborhood of south Minneapolis, a lower-income area of the city.

According to a statement from the company, the Franklin Avenue branch “will help provide access to opportunities for an underserved community rebuilding in the wake of protests related to the death of George Floyd and the economic challenges related to the pandemic.”

“When we first announced that we were coming to the Twin Cities, we committed to 30 percent of our branches being low and moderate-income neighborhoods,” said Jonathan Jensen, Chase’s market director of banking for the Twin Cities. “We really want to be the bank of choice for all communities.”

Jensen noted that the new branch is a “community center pilot concept” for Chase, only the second such location among Chase’s 4,900 U.S. branches.

“It’s the second of its kind in the company. The first one is in Harlem, New York,” said Jensen.

Jensen said that much of the bank’s diverse staff is drawn from the community.

“We speak many different languages in this branch,” said Jensen of the bank’s staff. “It’s that very hyper-local approach that we try to take to really meet the needs of the community…they are the community.”

The building was previously home to Roger Beck Florist for 14 years until Beck closed the shop and sold his building in 2018. The property is now owned by the Minneapolis-based Rule Breaker Three LLC, according to Hennepin County property tax records.

Although Chase’s Commercial Bank and Private Bank have been doing business in Minnesota for more than 15 years, it had no retail bank presence in the metro until opening a branch at the University of Minnesota in July 2019. It has since added locations in St. Paul an St. Louis Park.

At the same time, JPMorgan Chase announced $1.75 million in philanthropic commitments which a heavy emphasis on helping local minority business owners. The contributions include:

What Does Covid-19 Mean for Halloween Sales?