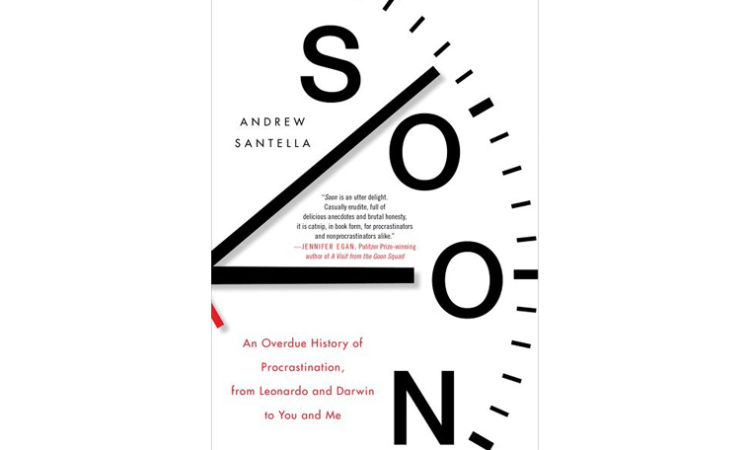 Procrastinators, as it turns out, are in good company: 1 out of 5 of us chronically waits until the last minute to start tasks. Such delay, says Santella, “is one of the oldest stories ever told.”
By Terri Schlichenmeyer
April 03, 2018

That’s a demand that comes from everywhere. Sneakers say it, your spouse says it, the law demands it, your diet may say it; your boss does, for sure. Just do it. Buckle down and get it done because, as in the new book “Soon” by Andrew Santella, delaying and dawdling are not so delightful.

Charles Darwin was a terrible procrastinator.

It’s true that he got things done: he was an accomplished author, a father, a scientist who studied barnacles almost to the point of obsession, and his thoughts on what he called “natural selection” had been arranged cohesively and written.

Twenty years went by before it was published.

As he was preparing to write this book on procrastination – research which he’d put off until he couldn’t wait any longer – Andrew Santella began seeing a lot of foot-dragging hidden throughout history. Procrastinators, as it turns out, are in good company: 1 out of 5 of us chronically waits until the last minute to start tasks. Such delay, says Santella, “is one of the oldest stories ever told.”

Not only do businesses demand on-time productivity, but self-improvement books and classes are filled with anti-procrastination advice. Says Santella, none of that takes into account “the stuff that makes life such a precious mess…” And it doesn’t do anything to eliminate what is believed by some to be the root of the problem, which is that people are ruled by emotions – especially fear.

To try to control time-frittering, remember that “behavior shapes mood.” Do that which you’re putting off and it “will make you feel better.” Keep in mind that there is a good side to procrastination, and that’s optimism: tomorrow is always a good day, for a procrastinator. Take a page from Benjamin Franklin, and make a list of things you need to do. Remember that it’s “nearly universal” to fit work into the time it’s allotted. Minimize distractions, utilize productivity apps, muster all the self-restraint you have, and remember that you’re not alone.

And if all else fails, pray to St. Expedite. He’s the patron saint of procrastinators.

Time’s a-wastin’. You need a book to help you conquer your habit of lateness but “Soon” isn’t it. Even so, it’s a great way to kill time because author Andrew Santella says he’s exactly in your same position.

As it turns out, so were a lot of famous people – most of them, quite accomplished in fields of history, literature, and psychology. That, as Santella shows, indicates that even though foot-dragging is stressful and detrimental to one’s career, it doesn’t always lead to failure or worse. The anecdotes he shares sometimes get a little too deep, but they do provide insight as to why someone might dilly-dally and, if you’re willing to dig a little, what can be done about it.

That makes “Soon” a book for procrastinators and for those who aren’t, but are irritated by one. Chances are, that’s you, and you’ll enjoy reading it.