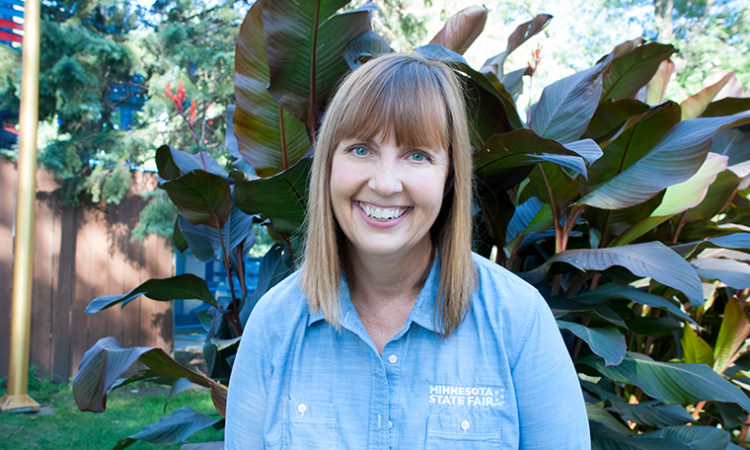 Behind the State Fair’s Marketing Operation

For Renee Alexander, marketing the Minnesota State Fair is a year-round gig. In a Q&A, she talks about changes to the fair's marketing strategies over the last decade.
By Dan Niepow
August 29, 2019

How do you market a more-than-century-old fair? That’s the question Renee Alexander ponders every year.

As deputy general manager of marketing and entertainment for the Minnesota State Fair, Alexander plays a key role in spreading the word across the state – and the country. (Last year, the fair welcomed guests from all 50 states, she notes.)

From new foods to performers and attractions, Alexander and her team are responsible for crafting marketing strategies for all aspects of the fair. The goal: Keep guests coming, and make sure they’re happy.

In Alexander’s 14 years in the role, things have changed quite a bit. Social media platforms have significantly changed some of her strategies, as they have for virtually every business. For Alexander, video has become key to reaching a new generation of fairgoers.

In a Q&A with TCB, Alexander shares some more details about her job with the fair.

A: I have four on my marketing team. Guest services employees also fall under that umbrella, which makes sense because they manage all our information booths and other front-facing services during the fair. And I have a creative team of three in our web and publications department. But I would say we probably double in size over the summer.

Q: Are those summer workers regulars?

A: People that work here kind of gain a passion for the place, so, yes, we have people that come back year after year. At the fair, we have awards recognizing 50 years of service, and we’re always handing out several of them every year, believe it or not. That’s great for us because there’s a lot of institutional knowledge that comes back every year.

Q: How long have you personally been with the fair?

A: I actually started as a college intern in the free entertainment department. Then, I was hired on full time and spent five years here. I left for about 11 years, but now I’ve been back at the fair for 14 years.

Q:I’d imagine you’ve accumulated some institutional knowledge of your own in that time. How has your job changed over the years?

A: The entire marketing world has changed with the advent of social media. Everybody has a voice and an ability to reach your business. That wasn’t always there in the past. And in reverse, we’re able to hear what people are thinking and what they want to see a lot more easily than we ever could before.

A: Creating more video content. That’s been big for us. This is also the third year we did a digital media buy, where we’re buying ads on Facebook and Instagram. So that’s relatively new.

Q: Here in the metro, the fair is pretty ubiquitous. But how do you market the fair to folks living in Greater Minnesota?

A: We still do some traditional print advertising in Greater Minnesota. We’ll also do some TV spots, and a lot of radio. But then, that’s the beauty of social media: It goes pretty much everywhere.

Q: Do you tend to see more attendees from the metro or from Greater Minnesota?

A: Well, it’s even bigger than that. When we moved to a more electronic-based ticketing system, we asked people for their zip codes. Last year, we had representation from all 50 states and 30 countries. It’s really grown. The seven-county metro region probably makes up the majority of our attendance, but obviously we reach much farther.

Q: Was last year the first time you saw attendees from all 50 states?

A: We’ve only been tracking that information for about three or four years, but no, that wasn’t new. But the number of countries has increased every year.

Q: And so has the number of total attendees. You’ve set new attendance records for the last three years. Do you hope to set new records this year, too?

Q: How else do you quantify “guest experience”?

A: We answer every single email that comes in. We have a pretty comprehensive guest services program. So, we analyze all that feedback that comes in throughout the year and during the fair. The number of complaints is generally small, but we take every single one to heart. For us, the question is, how can we help manage and improve that in the future? As an example, we still have operators that answer the phone. It’s really that personal touch that’s kind of lost in a lot of places. We really see our staff as our secret weapon.

Q:When did you start marketing the 2019 fair?

A: We started announcing the grandstand artists back in December of last year. Several years ago, we implemented a change in our general marketing strategy. We used to announce all artists at one time, and now we roll them out one or two at a time over several months. But as far as marketing the fair itself? We look at late May as the kickoff of our big marketing efforts. We strategically share information about the fair over time. June is for our new food announcements. July is for new attractions. Then, we announce new beers in the earlier part of August. Our true paid advertising doesn’t really start until late July. And we’ve really upped our social media game year-round, too. We’re working on engaging that audience year-round. Ultimately, our website and our app are our lifeblood from a marketing perspective.